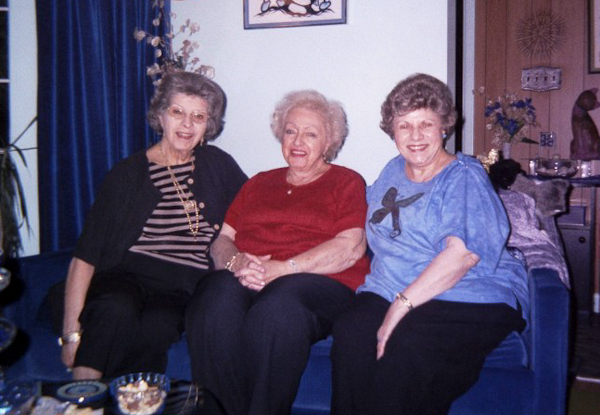 A genealogist once told my father (Carl Florio) that we descended from John Florio, the noted translator who spent many years in England and was one of Shakespeare’s inner circle. It has just come to light that his second wife, Aline, was very promiscuous and is likely the Dark Lady of Shakespeare’s sonnets!

Some of the information about our grandparents is in John Florio’s book. He knew more detail than my father ever told us, but I do know that our grandfather worked as a mason, brought here from Italy with a group of masons who were needed to build several key buildings in New Haven, as well as much of the street curbing. Our grandmother was a midwife and herbalist who owned n a general store (perhaps initially run out of the house) where she sold home remedies as well as other items.

By the time our fathers were young boys, the family had an apple orchard. My father recalled having a goat who pulled a wagon which he used to make deliveries, probably of things from the store, but maybe also apples. By the time he was 14 or 15 he was driving trucks filled with apples to New York, and his father soon built a cider mill so they could process the apples in New Haven.

There were allegedly two sisters who died in a fire, but it’s not clear if they were just babies, born before Lena, or between Lena and Tony and Tony and Daddy. They don’t appear in any records. In the 1910 census, Giacamo and Filomena were listed as not being able to read or write, but they both spoke English, and he was employed at a masonry company and she as a grocer. By the 1920 census, Emily’s name had been corrected, but Nathan’s hadn’t.

Caserta, where both Giacamo and Filomena were born, is the capital of the province of Caserta in the Campania region of Italy. It is an important agricultural, commercial and industrial commune and city. Caserta is located on the edge of the Campanian plain at the foot of the Campanian Subapennine mountain range. It is 40 km north of Naples and is part of its metropolitan area.

I’d love to share my memories of spending time at the farm in Orange when I was in elementary school. I don’t think I have any photos, but I’ll look through old albums to see what I can find.  I think you and your siblings all know how close our fathers were.   Your dad designed the wonderful landscaping of our small back yard on  Alenier Street in Hamden, managing to include a rock garden, a grape arbor, apple and pear trees and three mulberry bushes. He then built the stone fireplace in our cottage at Indian Neck when my parents first bought that property in the early 1940s. Before my parents moved to Florida, the two couples got together every few weeks, usually at the shore in the summer and in Orange in the winter. I remember when your parents renovated the basement kitchen and put in all new appliances. Your mother kept the old wood stove because it made the best pies and pizza!      Love, Bobbi