Spring 1954: I was twenty years old and in love with a wonderful man, who confirmed his love for me with a marriage proposal. My fiancée’s boss, Norman Wilder, proposed fixing up the old… circa 1730…house on the property the Game & Fish Commission had recently acquired, which would be the refuge headquarters and our home. Under Tony’s guidance the approx. 6000 acres of marsh and fast land would become a waterfowl refuge and hunting area. 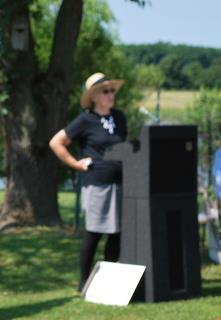 On a beautiful spring day I was introduced to the few hundred acres of the area’s upland. At the end of a half-mile long, dirt road sat the Sutton House, a.k.a. the Bickley estate, a two-story brick dwelling with broken windows, no floor in one of the downstairs rooms, no plumbing, heating or electricity. Three outbuildings…a sturdy square building, a barn with attached shed and a smokehouse… completed the picture.

For me ‘twas love at first sight!

Making the house livable was an odyssey in itself, with the necessary changes not quite completed when we returned from our August honeymoon to Canada’s Gaspe Peninsula. Two months later hurricane Hazel arrived, doing considerable damage to Delaware but, thankfully, little to the staid old house which, over 200+ years, had certainly weathered many storms.

Prior to that storm a black Labrador retriever puppy we dubbed “Kathleen Mavourneen” joined us at the Woodland Beach Wildlife Area. The following summer daughter Gwen was born, followed by son Roger. Our last child, Kathleen, who often announced she was not named after a dog, completed our family.

Some of the storms we experienced were memorable. During our early years at the Refuge electric outages were fairly frequent. No electricity meant we had no running water or working stove. Also no heat, other than what the seven foot wide kitchen fireplace could provide.

Getting snowed in was just part of winter. Our longest housebound spell lasted a week, again without electricity & all the comforts that provided. The writings of James Whitcomb Riley became the family favorite during such times. Hurricanes Diane and Hazel, an unusually strong storm-at-sea or even extra high winds coinciding with full moon tides, meant the house was literally surrounded by water. One receding tide left fish flopping in the lane. Daughter Kathleen, walking from her end-oflane school bus drop-off, ditched her schoolbooks and scooped up a large carp which she proudly carried to the house in her skirt.

During our 32 years living at Woodland Beach, along with many insects (an understatement), we shared our lives with various creatures, some furred, some feathered. Orphaned and/or injured they became part of the household, generally needing…actually demanding…special care, frequently! Usually our temporary guests were named, with many having distinct personalities. The hawks and owls were housed in large cages outdoors while the ‘critters’, i.e. fawns, opossums, raccoons, a woodchuck, skunks, orphaned rabbits, small birds, such as sparrow hawks and even a starling, generally had the run of the house.

One spring, prior to the paving of ‘our’ section of Route 9, grocery shopping became an adventure. After an unusually cold and snowy winter, spring’s freezing and thawing turned the dirt road into a sea of mud. We solved our seasonal travel dilemma by parking the car one and a half miles away on paved Route 6. Tony mounted a new, large garbage can on the back of the tractor. For several weeks my shopping involved driving the tractor to our parked car, then driving the car into Smyrna. The size of the garbage can, not the contents of my wallet, determined the amount of groceries I bought. Returning to our neighbor’s house, I then transferred everything from the car to the garbage can, climbed aboard the tractor and slowly navigated the rutted, slippery road home.

While the fields were planted to soybeans and corn Tony worked at beautifying the area around the house. Eventually over 100 trees were planted along with foundation plantings of flowers and shrubs. My contribution was done in the fall when the Canada geese began to arrive. Each year I planted dozens of daffodil and jonquil bulbs along the lane, from the main road to the house and around the shallow ponds that were installed to attract waterfowl.

The geese and ducks weren’t long in recognizing the shelter those ponds and adjoining fields provided. Their numbers increased dramatically. For several months each year we fell asleep and awoke each morning serenaded by the honks and gabbling of the geese that literally surrounded the house. We quickly adapted to each other’s habits. When I went to the clothesline the birds simply moved aside, making a corridor for me. They also moved aside when our son needed space to noisily bang a basketball into a hoop mounted on the barn.

For many years Tony’s office and drawing board were in the house with ‘office hours’, it seemed, any time! Weekends were especially busy. Early morning and late night phone calls were part of the routine…folks asking about the times of high or low tide, hunting regulations¸ birding identification, etc. For a few years the Game and Fish radio’s base station was housed in the kitchen. During the opening days of the various hunting seasons our meals were rather sketchy as the radio and telephone calls were practically non-stop.

Over the years waterfowl and vehicular traffic increased. Eventually Route 9, formerly a half or 9 foot road, was completely paved, as was the lane to the house which remained the area’s headquarters. In time snow geese were no longer a ‘new attraction’. The flower bulbs bloomed; the shrubs and trees grew…and the years whizzed by. After 32 years it was time to move on, literally and figuratively; however the memories of our time in the Sutton House on the Woodland Beach Wildlife Area remain.