A dedication ceremony Monday honored Florio, who finished his long career as Delaware’s Wildlife Section administrator with the Division of Fish and Wildlife in 1986.

The Woodland Beach Wildlife Area northeast of Smyrna was dedicated on Monday to Tony Florio who retired as the Delaware Division of Fish and Wildlife’s Wildlife Section administrator in 1986. Pictured at the ceremony (from left) are Tony Florio, his wife Pat, and their children, Gwen, Kathleen, and Roger. 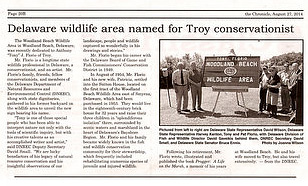 Longtime Delaware wildlife professional, conservationist, writer, and artist Anthony J. “Tony” Florio was honored Monday when the Woodland Beach Wildlife Area where he worked and lived was dedicated in his name.

Fittingly, Florio, his family, friends, Division of Fish and Wildlife co-workers, and fellow conservationists gathered in Florio’s former backyard at the Thomas Sutton House on the wildlife area to unveil the new sign bearing his name.

Department of Natural Resources and Environmental Control Deputy Secretary David Small and Division of Fish and Wildlife Director David Saveikis joined a host of Division of Fish and Wildlife staff, past and present, at the event. During the ceremony, beneath the blue skies of a perfect summer day, tree swallows darted in and out of a nearby nesting box, feeding their young in front of about 160 guests.

“Tony is one of those special people who has been able to interpret nature not only with the tools of scientific inquiry, but with his creative talents as an accomplished writer and artist,” said Small. “We are lucky benefactors of his legacy of natural resource conservation and his insightful observations of our landscape, people and wildlife captured so wonderfully in his drawings and stories.” 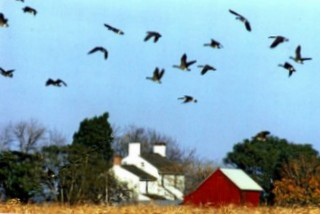 Saveikis recalled how helpful Florio was to him when Saveikis started working as a Fish and Wildlife biologist in 1980. “He was an inspiration who helped me develop as a biologist and conservationist, and I am honored to share this special day with Tony and his family,” Saveikis said.

Florio thanked the friends, family, and co-workers at the ceremony and remembered those who have passed away. “Very few people have had a career so personally rewarding.  I’ve been blessed.  So many people have been so helpful to me through the years,” said Florio.

The idea for naming the wildlife area in honor of Florio came from Wayne Lehman, Division of Fish and Wildlife regional manager. Early in his career, Lehman worked with Florio. 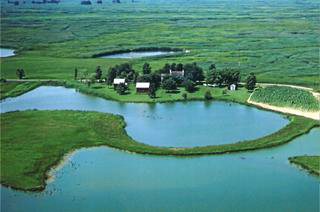 “I was inspired by all the work he had done,” said Lehman. “Tony was a great conservationist, and I thought this would be a fitting way to honor his greatness by dedicating this wildlife area in his name.”

Also recognized at the ceremony was Joanna Wilson, DNREC Public Affairs spokeswoman, for all of her work in the naming process and in organizing the ceremony.

Originally from Orange, Conn., Florio was an undergraduate studying forestry at the University of Connecticut when he began working on a grouse census project with a Connecticut wildlife technician named Norman Wilder. In 1948, Wilder was chosen as director of the Delaware Board of Game and Fish Commissioners’ Conservation Division. His first hire was the newly-graduated Florio in January 1949. In 1957, Wilder became the first director of Delaware’s fledgling fish and wildlife agency, today known as the Delaware Division of Fish and Wildlife.

“Norman Wilder took me under his wing and was my mentor, my guidepost, and many times, my salvation,” said Florio. Florio wrote an Outdoor Delaware article in 2011 celebrating the 100th anniversary of fish and wildlife conservation, recalling Wilder’s accomplishments during the 22 years they worked together.

“Under Norman’s leadership, the mold was created that would produce the long-term shape of fish and wildlife management in Delaware,” Florio wrote. “His was a far-sighted vision, and spot-on, especially with regard to wetlands, the heart and soul of the magnificent Delaware estuary.”

In August 1954, Florio and his new wife, Patricia, settled into the Sutton House, located on the first tract of the Woodland Beach Wildlife Area east of Smyrna, which had been purchased by the state in 1953. They would live in the 18th century brick house for 32 years and raise their three children in “splendiferous isolation” there, surrounded by scenic waters and marshland in the heart of Delaware’s Bayshore Region.  Florio and his family became widely known in the fish and wildlife conservation community for their stewardship, which frequently included rehabilitating numerous species of juvenile and injured wildlife.

“Pat cheerfully put up with all my faults and foibles,” said Florio, who added that living in the Sutton House presented many challenges, from frequent power outages and occasional lack of heat inside, to the muddy roads and bothersome insects outside.

“There’s no way I can ever convey my everlasting love and gratitude to her,” said Florio, who also talked about how proud he and his wife are of their three children, Roger, Gwen, and Kathleen.

Florio began his fish and wildlife career as a wildlife technician doing fieldwork and mapping newly-acquired state wildlife lands and new ponds. He was especially involved in developing waterfowl and mosquito impoundments at Woodland Beach, Little Creek, Ted Harvey, and Assawoman wildlife areas, as well as many waterfowl ponds on public and private lands.

As an artist, photographer and writer, Florio illustrated calendars and became a frequent contributor to the agency’s magazine, the Delaware Conservationist, first published in 1957 and continuing today as Outdoor Delaware. Florio finished his long career as Delaware’s Wildlife Section administrator with the Division of Fish and Wildlife, retiring in 1986.

During Florio’s 37 years of state service there were many milestones. In 1970, the Delaware Board of Game and Fish Commission became the Division of Fish and Wildlife as part of Governor Russell W. Peterson’s newly organized Delaware Department of Natural Resources and Environmental Control. In 1971, Governor Peterson’s landmark Coastal Zone Act passed into law and continues to protect the state’s coastal areas. Having gained support from federal and state funding, as well as private partners such as Delaware Wild Lands, wildlife lands statewide grew to encompass more than 60,000 acres, with public hunting and access areas, boat launches and fishing piers. And the foundations were laid for many of today’s programs that help conserve Delaware’s natural resources, from the Waterfowl and Trout Stamp programs to the highly successful project to restore the state’s wild turkey population.

As for the wildlife area that now carries Florio’s name, Woodland Beach Wildlife Area today has grown to 6,320 acres and includes three major tracts: the main tract, McKay Tract and Matarese Tract. Its amenities and attractions include a 60-acre waterfowl refuge; fishing and crabbing from the pier that extends from the town center of Woodland Beach on the Delaware Bay; a 1.5-mile nature trail; and the Aquatic Resources Education Center (AREC) for students and teachers, which includes three catch-and-release stocked fishing ponds and a 940-foot boardwalk interpretive trail over tidal marshlands behind the center.

In retirement, an author and traveler

Following his retirement, with the encouragement of June Sayers of the Smyrna Clayton Heritage Association, Florio wrote, illustrated and published “Progger: A Life on the Marsh,” a memoir of his Woodland Beach years that includes a slice of the area’s rich history.

He and Pat now make their home part of the year in Vermont, and travel extensively. Their travels include frequent visits to Delaware, where they always make sure to travel along the Bayshore’s most scenic byway – Route 9, which was for so many years their road home, and which remains a pleasure and inspiration.

“The Delaware Estuary is second to none, and to know that the path forged by Norman Wilder is today being traveled with increasing vigilance gives me much satisfaction,” Florio said. “Certainly there have been and will be hiccups along the way – but my optimism for the future lies in my admiration and confidence in the new generation of conservationists, who will, in my firm belief, find the path that leads to both economic and environmental success.”